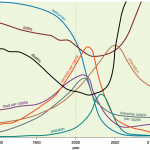 In 1972 the study Limits to Growth was published. It was an overview of several so called future scenarios. It sometimes is said that the study didn’t predict the future correctly, because it didn’t predict climate change. But that was not the theme of the study. The study showed that unlimited growth in a finite ecosystem (planet earth) is not possible. Either one has to limit growth by deliberately changing some of the input variables of the system or the system will collapse spontaneously. And because we didn’t fundamentally change our goal (unlimited growth), now we can see the beginning of the collapse. So the study is more up-to-date than ever.

The other day I saw an interview with Dennis Meadows, one of the authors of the study (see: https://www.facebook.com/pg/WeLoveEarth.org/videos/?ref=page_internal , a must see). Among other things two comments stood out for me. One, he confirmed that in 1972 climate change was not a matter of much attention. The general message of the study in 1972 was, as  I said above, that unlimited growth in a closed system is impossible. If, by any miracle, global warming suddenly would come to an end, then the present earth system would collapse in another way: by pollution, collapse of ecosystems, extinction of species, water shortage, shortage of resources, epidemics, or whatever. (By the way, climate change was mentioned in the upgrades of the study: eight times in 1994 and 24 times in 2004).

His other message was that nowadays the scientific knowledge about the effects of unlimited growth is spreading. But this strangely enough didn’t result in a change of worldwide policies. We still aim at unlimited growth. He then realized that a deliberate change in the system only could happen when two conditions are fulfilled: scientific knowledge and care. One has to know what is going on in order to change ones goals or behavior, but that condition is not sufficient. One has to care for the system as well. It’s also the other way around: care alone is not sufficient. The Dalai Lama and the pope are examples of persons, whose care has no effect on our behavior concerning global warming.

Meadows himself as far as I can see is an example of a person who does have the scientific knowledge about the system and also cares for the earth. He knows a drastic change of the system is unavoidable and that this will include misery and pain. But he still is hoping that this can happen in a relative peaceful and non-violent way by human intervention. This only can take place if we care enough for each other and the earth. But he doesn’t see how one can promote care in people. Voters, for example, base their choices upon a short time span: two or three years, so that they don’t have to care for the far away future. Politicians do the same – their main concern seems to be: shall I be reelected? (a time span of four years or less).

Basically the capacity to care is present in all of us. It is a manifestation of our ability to love. But the problem is: care does not come without commitment, or even sacrifices. It may disturb our peace of mind. But what do we really choose? Staying in our comfort zone, which, if we come to think about it, is not that comfortable at all? Or do we want to make a difference?