Imagine. . . the Challenge of Unity

In 1991 we organized a conference in Bechyne, Czechia, with the title: The Challenge of Unity, where we developed a vision for the future. This vision was published in Earth Fever (Judy McAlliser, Erik van Praag, Jan Paul van Soest, 2009). Today it is (unfortunately) as topical as ever, and it deserves attention once more. That’s why I publish it below.

Just imagine a society in which life is sober but yet full of celebration. One in which it matters to us not just how we ourselves are, but also how our brothers and sisters all over the world are, including all those who come after us. One in which we know we are part of nature, feeling her suffering ourselves, and also aware of her beauty and power. A society in which we , like Francis of Assisi, see animals as our brothers and sisters. A society, in which we quite naturally enjoy our contributions in work, education or in any other way in which we can express and develop ourselves fully. A society of liberty, equality and brotherhood/sisterhood, in which extreme differences in income and wealth are diminished and everyone has enough to live a joyful life. A society in which women have take their rightful position. A society without guilt, because we are connected with our deeper knowing and so personally and together go for the best choices we can see.
A society in which most of us let ourselves be guided by common sense, knowing that we are guided and supported by an invisible and transcendent world. A society in which indifference has given way to caring, with all the good feeling that come with it. A society without unnecessary fear, because we learned to live with the uncertainties of life itself, and know that suffering and death are not the final truths. A society based on faith, hope, love and courage. And, finally, a society that is characterized by one word: Unity. Between you and me, us and Gaia, us and the Cosmos.
In such a society the greenhouse gas emissions that are caused by humans will have bene diminished to almost nothing, because the knowledge of the consequences is then widespread, and we won’t do that to Gaia and ourselves.
In this society there will still be grief, illness and suffering, because these are intrinsic to life itself. This society won’t be perfect, because we aren’t perfect. There will always be people, who stray away form the ideal just described, who want to have what belongs to others, people who will commit crimes. However the society will have developed a legal system, and a health system, that deal with these problems with compassion and clarity. This society is a democratic one whose inspiring leaders are connected with what is on people’s minds and hearts. Our role as citizens will be balanced with our role as consumers and shareholders. In such a society we are connected with our own dignity, and with the gratitude that we are living in this magnificent, challenging, exciting, beautiful lifetime. 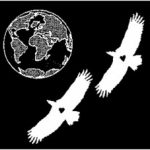 An utopia? Or a feasible vision, an alternative to the collapse of the present feverish world? Maybe the world that we’ve painted is not your ideal world, but there’s nothing to stop you from dreaming your own dream.

Due to holiday the next blog shall appear not until July 21st!