No one else could have done this.

The last few weeks much is written  about the legacy of president Obama. Generally is is said that he was a decent man with class, but that the results of his presidency were meagre.

He inverted a big recession, he let restart the automobile industry, he triggered the longest period of job creation in American history, he realized the equalization of gay marriage, he provided a health insurance for 20 million people, he prevented the construction of a dangerous pipeline, and more. . .

But his foreign policy was a failure, it is said.

He closed a deal with Iran, thus preventing the development of atom weapons in that country without any violence, he normalized the relationship with Cuba, he eliminated the brain behind 9/11, together with China he made a big step in tackling the climate problem and undersigned the treaty of Paris. . .

Yes, but he didn’t succeed in promoting a solution in the Israelean-Palestinian conflict, en didn’t effectively intervene in Syria, thus leaving the space for Russia and Turkey to fill the gap, so the quibblers continue.

It always strikes me that those who have these kind of criticisms don’t have the faintest idea about what then could be done. What do they want: a new Middle East war?

Anyway, history will show the significance of this president. Even if mr. Trump will undo as much as he can what president Obama accomplished, it nevertheless may be that Barack Obama marked the beginning of the Great Turning Joanna Macy is speaking about, and that the phenomenon Trump (and the populist leaders in Europe) are the last spasm of an era and a system that is broke. The protest marches of unprecedented scale (with a majority of women!) may well be a sign of the new era. 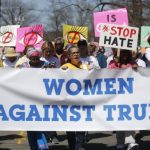 I always thought that we needed one or more disasters to turn the tide; to cause a new state of consciousness that could heal the planet, or at least let humanity survive. But then I always thought of disasters caused by climate change. What I didn’t realize is that calamities can be produced even more directly  by the ‘leaders’ we choose and can come earlier. I think the contrast between the benevolence of Obama and the maliciousness of Trump may accelerate our transformation of consciousness. There can be no awareness of light without the absence of it. It is called darkness. Where Obama didn’t succeed in: uniting us, Trump may accomplish by the rebellion he creates. In the words of Caroline Myss: We have to say to him, “Well done. Thank you for uniting us. Honestly. We thank you. No one else could have done this.”

Antwoord aan No one else could have done this.