Not in our own interest.

“The Dutch and the American government almost at the same moment reached rock-bottom: canceling the amnesty for children of migrants who are already in the country for some considerable time – so that they have to return to a country they hardly know, and where they are not welcome, and  even may be in danger -, and the intention to build walls around their countries to stop migration”. (James Kennedy, in the Dutch paper Trouw,  10/14/2017). In Holland these walls are not physical (that is not possible) but administrative.

We, in Europe, tend to blame president Trump and the right wing Republicans because of their narrow-minded and heartless policies. But in fact we in Europe do exactly the same, only more concealed. Instead of blaming America, those who voted for political parties who are supporting this policy, should go and sit in a corner being ashamed and feeling remorse. (btw: interesting: The parties who are pleading for a more humane migration policy, are also the parties who advocate a stronger climate policy. Mere coincidence?)

Everywhere countries appear to close the borders. Instead of peace and harmony this will create hostility and violence. So this policy is not even in our own interest, nor in that of our country. If we are willing to give these facts attention, not just for a moment, but continuously, I am sure this will exert influence on our social and political behavior. 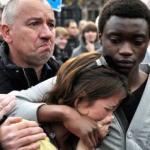