Sisiphos and the meaning of life.

You probably be acquainted with the ancient Greek myth of Sisiphos. As the legends say he founded Corinth and became its first king. “He promoted navigation and commerce but was avaricious and deceitful. He also killed travellers and guests, a violation of xenia which fell under Zeus”s domain. He took pleasure in these killings because they allowed him to maintain his iron-fisted rule.” If you want to read more about him I advise you to read https://en.wikipedia.org/wiki/Sisyphus . (Quotes in this and next paragraph are form this lemma). 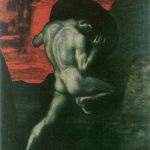 “As a punishment for his trickery, King Sisyphus was made to endlessly roll a huge boulder up a steep hill. The maddening nature of the punishment was reserved for King Sisyphus due to his presumptuous belief that his cleverness surpassed that of Zeus himself. Zeus accordingly displayed his own cleverness by enchanting the boulder into rolling away from King Sisyphus before he reached the top, which ended up consigning Sisyphus to an eternity of useless efforts and unending frustration. Thus it came to pass that pointless or interminable activities are sometimes described as Sisyphean.”

Many authors wrote about him, seeing the metaphor with life itself: a continuous uphill struggle to no avail, especially when you want to make a difference. But there are essential differences between the labour of Sisiphos and the struggles in life. The first difference is that in life we have free choice. Most of the time we can choose if we want to make this effort or not, and even when fate hits us badly we always have the choice to resist or to surrender. Sisiphos doen’t have this choice – he is forced to give in (how? About this the myth is not clear). The second difference is that for Sisiphos nothing changes. Every time uphill, and during his descend downhill, his situation and his activity are absolutely the same. But in real life no uphill struggle is the same as the last one. Every activity we do is unique in itself, and never done by me or anyone else before in exact the same way. If I write a book, deliver a speech, write a blog, or even when I just say or do a tiny thing I can be sure that this is never an exact copy of earlier behavior, either by me or somebody else. Nor will it be copied exactly in the future. For example: as I write a book, hardly any idea in that book is new. Most are formulated ages before. But the pattern that I create with these ideas is new indeed and a unique expression of the unique me. And so it is with everything I do and say.

Also in real life the environment is changing constantly. That is not true for Sisiphos: his surroundings are every time exactly the same. It is as if time doesn’t exist. And finally: in real life every action has an effect. That is not so with the act of Sisiphos.

So my conclusion is that life never can be a Sisyphean labour. We can see it that way, but that then is a distortion of reality that undermines the idea that we can give meaning to our lives. With this concept I open a complete new subject, but that is for another time. So let us end here, with a quote of Joseph Campbell: Life is without meaning. You bring the meaning to it. The meaning of life is whatever you ascribe it to be. Being alive is the meaning. And so it is.

Disclaimer: I apologize for mistakes in my English. Blogs are cursory – not stuff for correction by a native speaker