Because it is time again for my English blog I have to interrupt my series about leadership and cultural change for a week.

It may be that I was wrong with my prediction that Trump is going to win this election. I underestimated his stupidity. Although, we can never be sure until we see the final outcome. Only one terrorist attack, or one blunder of Clinton could change the picture. And also some polls predict a neck-and-neck-race. We’ll see.

I saw the last debate between Trump and Clinton, and for me the winner indeed was Clinton. Not so much by her line of argument or by her presentation, but because of what happened after the end of the debate. Fortunately I kept on watching after the actual debate was over. Clinton, after shaking hands with the debate leader, descended from the stage joining her friends, supporters and family and engaged in hugging and kissing and conversation. She smiled and laughed and appeared to be very relaxed. For a moment we saw the real, authentic Hillary.

Trump on the other hand stayed on stage alone until some family and supporters came up. His facial expression was very grumpy. He didn’t make any contact with whoever tried to approach him. After a while he also went down and arrived amidst his supporters, but his facial expression stayed the same, and he  still prevented anyone to connect with him. It looked as if he felt he lost the debate. Anyway it didn’t go the way he wanted. So here too we saw something of the real Donald.

Why would it be so terrible if Trump would win the election? I don’t think that it would be because of his opinions as far as he has them (he is very freakish). There have been extremist right-wing politicians elected before, and in most cases it didn’t mean the end of the world. If you like that or not depends mainly on your own position – for many voters the election of a right wing politician feels like a victory.

But I think Trump is a greater danger than can be deducted from his opinions. That is because of is his personality. As a psychologist I am very hesitant to say things about the character of a person in public, without knowing him personally or having him (or her) tested. But in this case I am going to make an exception for two reasons: I saw him often online, and also because he uses his personality as a tool in the campaign. 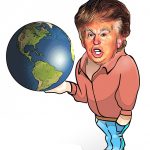 As far as I can see mr. Trump has a psychopathic character structure. Now what does that mean? It means two things. One: he has no conscience as most of us have it. That is not a thing he can be blamed for, it is just a trait of his personality, probably mostly inborn, maybe partly a result of his education. Secondly, having no conscience, he also hasn’t a emotional life as we have it. There are no heart feelings, only emotions that have to do with winning or loosing (triumph, rage). As a result of this he is only motivated by winning. He will do everything to control the situation. That makes him the perfect (successful) fraud. And if he looses (for instant an argument or control), he has only one response: blaming, undermining or humiliating the persons or institutions that defeated him.

These personality traits make mister Trump very dangerous as a president. He will be completely unpredictable and will do everything to win. We have seen that before in history. We also see it nowadays to a certain extent with some other leaders in the world.  The reader can judge for him- or herself what were, are  or will be the consequences.

In the meantime I feel very frustrated as a world citizen that I cannot vote in an election that will determine much of our future. I hope our American friends won’t let us down. As I said earlier, we’ll see.