Do Santa Claus and ecosystems exist? And God?

Now that summer is coming to an end and the meteorological autumn  is almost beginning (September 1st) it is time for going inside and do some study and reflection. So I went on a retreat in a monastery and started to read  one of the latest books of Ken Wilber (Integral Spirituality, 2007). That led me to the following question: does Santa Claus exist?

To answer this question in a meaningful way I want to make a short excursion to modern developmental theory. Many authors and scientists have extended evolution theory to a description of  the evolutionary development of cultures. The most well known of these descriptions is spiral dynamics, but there are many more. Often the colors of the rainbow are used to denote the different stages in this evolution, from infrared to ultraviolet or clear light (Spiral Dynamics has a slightly deviating system). I for myself roughly differentiate between traditional (up until amber), modern (orange), postmodern (green) and unknown (turquoise and higher).

Now, before returning to my question about the existence of Santa Claus I want to pose another question first: do ecosystems exist? If we should have asked this question to people in the traditional epoch they wouldn’t have understood the question. They couldn’t have consciously found and perceived an ecosystem. The concept simply wasn’t there, and what you can’t conceive you can’t perceive. Now the interesting question is: do ecosystems in the traditional world exist? Don’t fall in the fallacy of the myth of the given: that reality is something that is simply there, given to us. Since Kant we know that reality is at least partially a construct of our mind.

So ecosystems certainly exist in modern and postmodern times, but if they existed before that time (and for people who still live traditionally today) remains to be seen. I gladly leave the conclusion about that to the reader. 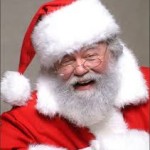 Now about Santa Claus. The myth of Santa Claus certainly fits in the traditional way of thinking, although in traditional times the myth was quite different from how it is now. Phenomena in earlier stages of development can always survive in later stages. And this myth, in some form, certainly has survived the centuries. So what can be said is that the myth about Santa Claus (and in Holland: Sinterklaas) certainly exists. But does Santa Claus himself exist?

When I, with my grandchildren, am watching the arrival procession of Sinterklaas in the Netherlands, and I see not only children, but grown ups as well,  cheering and waving, then I know Sinterklaas exists. And he exists independently of the cultural level of the onlookers. Maybe emptiness is form and  form is emptiness (Heart Sutra), and physical reality is an illusion, but the joy certainly is real. As Richard Back (Donald Shimoda) said in Illusions: The image is the dream, the beauty is real. And so it is.

And God, does he/she/it exist? If it is true that we co-construct reality, then maybe we also co-construct God. The way God then manifest him/her/itself depends on the cultural development of the constructing person(s). If this is all true, the question if God exists becomes obsolete. God is because we are, and surely is more than religious projection. But anyway, if we want to have a meaningful experience representing God, it as a rule demands a lot of investment in time and energy (training in concentration, meditation, prayer, ritual, taking time in silence). About that all spiritual and religious traditions agree. Only in exceptional cases the experience of God is just given to someone by grace.

So far the results of some weeks of study and contemplation. As the freemasons say: so mote it be.