I don’t want to know.

Recently Jan Paul van Soest published his book ‘The Brigade of Doubt’ (unfortunately only in Dutch). A masterpiece and a must read *) for everyone who considers him of herself as concerned with what is happening in our society. In short: Based on extensive and intensive research he profoundly analyzed how systematically the merchants of doubt and their followers are calling in doubt or even deny all scientific knowledge about global warming**) and its consequences. These merchants of doubt – who are motivated by vested interests and a certain ideology – are so successful because there is a demand for it: we all need it. To show how this works I presented the following column when his book was officially launched:

Of course I don’t want to know. Suppose that it would be true – that is apparently not the case – but just suppose, then what does it bring me to know? I only should feel impotent. There is nothing I can do. Even so-called experts, like Jan Paul van Soest, seem to say that buying energy saving light bulbs, and setting lower the heat or the air-conditioning are only minor contributions. So I am powerless. Or I get overwhelmed by anxiety. Who wants that? Who wants to lie awake in bed at night? To be fair, it seems to me that not wanting to know is a healthy attitude.

I have my methods not to know. To begin with, I am simply denying it. I already did this with the climate crisis: it just isn’t true. At least as many messages that it isn’t true are published as messages that assert the opposite. Not that I am reading all that. I don’t read much anyway, that only would make me gloomy. And also I don’t understand it, it all is much too complicated.

A second way to not knowing is shopping selectively. Look at the picture. 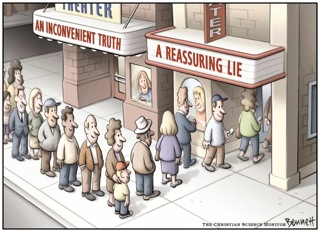 Do you see how tendentious this picture is? Of course I am not looking for a reassuring lie. I seek – and find –  a reassuring truth. I see fast enough if I become happy or gloomy by something. And see for yourself: who consciously is seeking depressing information? Isn’t that masochistic?

A third way to not knowing is sticking to my convictions. I firmly belief that when everyone is going for his own interests, and if government stays out of the way, we all shall be happier. One of the few books I did read is Atlas Shrugged by Ayn Rand. Well, I didn’t read that completely either, because at the end there is a very long speech that is terribly boring, and also I don’t understand the title, but this I did understand:  if we all pursue our own interests the whole world will be happy. Beautiful things will be produced, and prosperity will prevail. See, that is a message I want to hear. If we wouldn’t interfere in the people’s activities, and let the market do its job, then certainly we would find something to dove the climate problems. If there are any, what I do not believe anyway.

That’s why I am pleased that the Merchants of Doubt exist. That there are people who show a healthy skcepticism. Who are motivated by their own interest, and by vested interests. Who protect the profitability of the business world, by which we all benefit. Who let themselves be led by their ideals, which look like my own. My impression is that even Jan Paul van Soest has some empathy with these people.

And so I live on in innocence. And so I preserve my peace of mind. Annoying however is that somewhere in a corner of my mind very now and then a little voice is heard saying that maybe I am deceiving myself. But who cares? Still it is disturbing. However, this is none of your business. And moreover, I also have a remedy for that: shouting louder than that small voice. Getting angry to the messengers of bad news. Call them names. Not voting, or voting for people who are not mentioning problems, but only solutions. And so I am living on in a cloud of not knowing. Thank you for your attention.

**) It is very probable that the the temperature rise in 2100 will be about 4 degrees higher than the last 10.000 years. The consequence of this are hardly imaginable, but that they form a serious threat to the society and the environment as we know it, and even to humanity itself,  is certain. See also: Earth fever, by Erik van Praag, Jan Paul van Soest and Judy McAllister, 2008. Or for example: D. Archer, The long thaw, 2010. And if you really want to know in detail: Read the IPCC report 2014 for policy makers. Be ware that IPCC in its summaries is always a little bit biased to the positive  (less serious) side .