A few weeks ago I was in Israel – better said: in the occupied territories on the West bank. I have been there before several times, because I am supporting the Hope Flowers School for Peace education, and I know quite a bit about the situation there and the recent history. Nevertheless I was shocked. In the last twenty years that I was there I have seen the situation dramatically become worse. The building of the wall (dividing Palestine properties everywhere in separated parts), the demolition of houses, the destruction of orchards and agricultural and industrial projects (that were financed by the European Union), 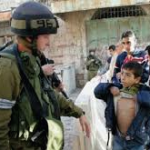 the humiliation of Palestinians (also children)  at the numerous checkpoints, the extension of the settlements, the aggravation of the economic conditions, the violation of international law – it all is happening at a much higher frequency and greater scale then years ago. A two state solution has become impossible, due to the enormous amount of Israelian  settlements on the West Bank (on Palestinian territory!). And the interesting thing is that Europe, the US and some Arabic states make this all possible, because they are financing the Palestinian authority and its institutions.

As I said, I already was pretty much informed about what was going on, but as I said I was shocked to learn how much the situation has worsened. The circumstances have become desperate for the Palestinans, with no perspective of any positive change in the near future. Now that Israel has appointed Lieberman as the new minister of defense, one can be sure that no improvement of Israelian policy can be expected – on the contrary. (Compared with Lieberman Trump is a wonder of modesty and decency – check it on the internet). With great effort Israel is working toward its own collapse.

After my homecoming I realized how little people in Europe and the US know about what is really going on there. Even people who think they are well informed (like myself) hardly realize the hopelessness of the condition in which people there have to live. Can you imagine how it is to live in occupied territory, subject to arbitrariness with no perspective for freedom?

Under these barren conditions the Hope Flower School for Peace education  tries to keep hope and perspective alive. I have a deep respect and admiration for the leadership of the Hope Flowers School and the Hope Flowers Community Center who with great effort and courage keep going, thus creating a safe space for traumatized children and promoting harmony and peace. They have to work against the mainstream, in that way performing a balancing act between taking a stand and keeping on speaking terms with both the Israelian and Palestinian authorities. And they are always short of money, because parents aren’t able to pay the full school fee (and meals), due to the abominable economic condition in the West Bank. If you want to support them, in the UK, US, Switzerland and the Netherlands there are local accounts, but you can also send a cheque to Hope Flowers School directly. You’ll find both the local organizations and the HFS on the internet. (In Holland: https://www.vriendenvanhopeflowers.nl/wordpress/?page_id=24 )

Hope Flowers School and Community Center: a beacon of light in a darkening world!